It is snowing in Chicago, and I’m indoors, observing the flakes from the warmth and safety of a comfy chair.  I’ve watched folks trudging down the streets, fighting the wind and cold, and have offered up murmurs of thanksgiving for a cup of hot tea, and the cat warming my lap.  My mind wandered back to a day a couple of years ago when I had an early 8 am dentist appointment one Saturday.  I’d walked to the dentist (a mere five blocks from my home), but while in the chair, a heavy snow storm hit.  Winds picked up.  It was near white-out at times.

When I left the dentist’s office, my face was numb: not only from the bitter wind, but also from the anesthesia I’d been given.  It had been a lengthy procedure, wherein old fillings from a childhood overseas were removed (having been deemed of poor quality) and replaced with more modern, quality material.  As I crossed the threshold out into the wintry mess, I wiped drool from the side of my cheek.  Ugh.  My eyes had watered during the procedure, and I was very aware of the mascara smudged beneath my eyes.  The sting of the wind was making my eyes water more.

I trudged the first block through about 8 inches of freshly fallen snow.  Beautiful, really.  But I’d not gone prepared, and my tennis shoes were slick and full of snow.  I glanced up and saw a man walking my direction and thought great… another one of the neighborhood’s homeless… expecting a handout.

As he approached I attempted to not make eye contact.  But he called out to me: “Lady?”  I glanced his way.

“Lady… you look really cold.  Could I buy you a sandwich? Or a cup of hot coffee?”  He pointed at the McDonald’s nearby.  And I stood there, gaping at the irony of my situation.  I mumbled a thank you, and he led me by the hand over a drift and into the restaurant.  I accepted a cup of coffee, and had an interesting conversation with someone from the neighborhood I would never have otherwise met.

He graciously mentioned that it was his faith tradition to help the poor and those in need.  I asked him what church he attended, and he pointed to the local mosque.  I smiled and mentioned I was baptist.  We rejoiced in the commonalities which bridge our faith, our neighborhood, and the human condition. 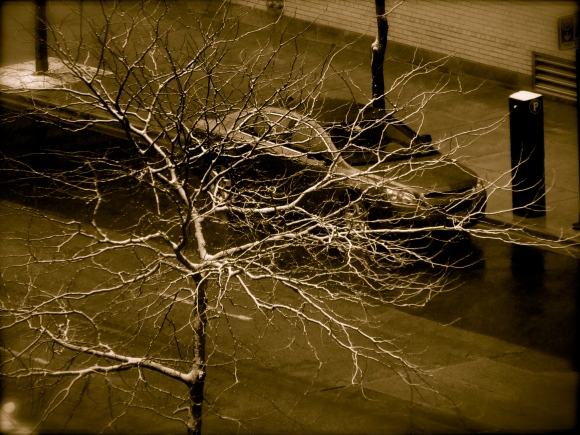 Winter in the city.

5 thoughts on “A cold neighbor”